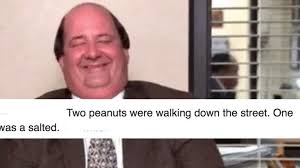 Social media is full of dad jokes. While some of them are very easy to comprehend, there are others which take a bit of thinking. When a man becomes a father, he has much more responsibilities than before but there are some men who choose to bring a little humor to the lives of the people around them. The humor begins to take form of their main responsibility and they become some of the funniest dads in the world.

This is what happens when you visit your parents’ house and you have a dad who loves Disney. When you are unable to go to the bathroom, you need some motivation.

Teaching The Kids About Taxes

Dads are responsible for teaching their kids about real life because they are not going to learn about things like taxes in school. And what better way to teach than practically and with ice cream?

The doctor told this girl that she needed to increase her sodium intake. When she told her dad about it, he sent her a 4-lb salt lick so that she could increase the sodium in her body.

So this girl’s dad’s toilet cracked up and it scratched him in the bottom. Being funny as he was, he drew up an illustration in order to warn the others about the biting toilet.

The Master Of The House

Dads in all houses have a thing with thermostats. They like to be in charge of the temperature of the house and this dad took it to the next level. Since he was paying the bills in the house, he locked up the thermostat and was the only one who knew the combination.

Facing The Realities Of Life

Every dad is protective of his child and there are some dads who would put themselves in danger to protect their own. However, this dad is realistic and cares a tad bit too much about his hair.

What do you expect to happen when you ask your dad to arrange the silverware in your house? He will do it, although begrudgingly. This dad decided that he would help with the chores and he decided to sort the cutlery according to color.

A man was asked by his doctor to submit a stool sample. He went home and started working on it. He switched on his 3D printer and printed out a small stool to give to his doctor.

This is a classic example of the lame jokes that the dads make during tough times. Given time, you would be able to tolerate the jokes and the nurse must be used to it by now since a lot of dads make it to the ER.

Not Knowing About Beauty Products

Dads generally do not take much interest in the beauty products of the house. That is a forte for the moms. When a girl asked her dad to leave the straightener outside the door before he went into the shower, he did not want to take any chances.

This is a good way of ‘not’ telling the people coming over that you have a crazy family. You can just take a moment to imagine what the people on the other side of the door are thinking.

Humor In The Bathroom

Life is too short to take things seriously. A dad went around the house shouting that he found a frog in the bathroom and needed the children to catch it.

When a person needs the people to smile for a picture, they usually ask them to say cheese or say something funny. This is a reaction that a mother and her daughters gave when the father told a dad joke.

This is messed up and the father is just telling the child that he was born by mistake. However, it can be just funny and we are sure that it was meant to be taken as a joke.

It’s Halloween time and it is time for the dads to go crazy. This is exactly what will happen when your dad decides to decorate the house with skeletons.