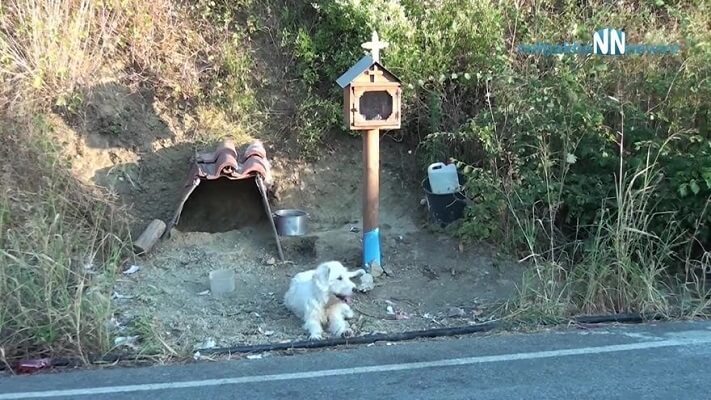 The bond between a man and his dog is one of the most powerful ones in this world. It is so strong that it is second to none. But if you are one of the skeptical people who doubt whether animals can feel emotions or not, then here’s a heartbreaking story for you. So, get yourself a handkerchief and prepare yourself for a tearjerker. Read the story of a loyal dog who refused to let go of his dead master –

1. He Is Called The Greek Hachiko After The Famous Loyal Japanese Dog

A 40-year-old man named Haris was this particular dogâ€™s owner. Everything was fine until one day, unfortunately on November 9, 2017, he had a fatal accident with a cement mixer. The incident had occurred on the Old Ring Road, which is on the way to the River Evinos. Coincidentally, his brother had also met a similar fate a few years earlier. This Impacted his dog quite badly and to this day, it is still waiting for its master, just like the famous Akita dog, Hachiki, who waited for its master 9 years after his death.

2. This Dog Has Been Mourning For Its Owner For A Year And A Half

As we said that the dog was deeply attached to its master. But it seemed that it did not comprehend that its master had passed away. So, the dog still waits for him on the very place his master had died. No one knows how he reached the spot, but somehow, the canine managed to travel seven and a half miles from its home in Nafpaktos to visit Harisâ€™ crash site.

3. The Locals Have Been Trying Convincing The Dog

It refused to leave the area, despite attempts being made to lure it away from the spot. No matter how hard anyone tries, all the efforts go down in vain. Although locals have attempted to take it away and find him a loving foster home, the pooch always finds his way back to that very spot. Now even the people have stopped trying.

4. The Dog Remembers Its Master a Lot

Your heart must cry out on seeing the miserable condition of the dog, doesn’t it? However, the story still continues. The locals were simply not ready to give up on this loyal dog. So they thought of a way out to help it. Instead of trying to find the dog a proper home, what they did was that they built him a tiny shelter. Somebody would bring over food and water.

5. The Locals Stop By, Time To Time, To Shower Some Love On The Dog

But at the end of the day, everybody knew that the wait would be endless and futile. The only person the dog wanted to see was Haris. But how do you explain it to someone with whom you can’t communicate? This is what makes the whole situation depressing. One cannot think of the entire incident without tears in their eyes.

6. The Locals Are Concerned About The Dog’s Future

This clearly proves that dogs also have a tough time dealing with grief. If only humans could love like this! The world would have been such a better place, if only humans were as loving and as loyal as a dog. But it’s heartening to see that the locals are looking after the pooch and keeping it comfortable.

7. All Animals Have A Range Of Emotions That Humans Don’t Know About

Everything would be fine if the owner didn’t meet an untimely death. But their time together was cut short owing to a stroke of misfortune. The terrible loss, where the pooch is left all alone, only with its owner’s memories. Humans should, therefore, not see this animal as lowly. They should treat dogs with all the love and respect in their heart.

8. Basilies Zelios, A Local, Has Developed A Special Bond With The Pooch

A local by the name of Basilies Zelios has developed bonding with this pooch and the dog responds back lovingly to him. He visits the dog every day and both of them behave like friends. But will this friendly relationship help the dog in overcoming its grief? Maybe, it can. But that is something that only time can tell.

9. Zelios Tried To Take The Dog Home Many Times

Owing to the love for this canine, in particular, Basilies has tried to take the dog to his home. But just like the others, he also has failed to keep it on his premises. But that has not deterred him from helping the dog. He brings it food, water and all the necessary requirements. He tries to help it out in whatever way he can.

10. He Visits This Pooch Every Day

He makes it a point to visit the pooch every day. Apart from the food and water, he also brings him the bare essentials – a rug, a toy, and a photograph, probably of the dog’s deceased owner. Zelios tries to comfort the dog with all that is in his power. If only God would allow him to provide the dog with eternal comfort!

11. He Brings Food And Water For The Dog, Daily

But he’s not alone. Other locals also leave food and water supplies of the dog. Seeing its loyalty, the people try to serve it in every way possible. However, they are pained to see him lying lonely all day. After all, he also deserves company. But how can you breach a dog’s emotions. So they let things be as they are.

12. The Dog Has Garnered Nationwide Attention

All these things have not gone unnoticed. It was only a matter of time this incident caught the attention of the local news channel. Nafpaktos News covered the story and relayed the report to the entire nation. Wishes from all over the country have been pouring in from that point on.

13. All The National News Channels Have Covered The Dog

Just after Nafpaktos News relayed this story of the dog, other news channels and media houses have also covered it. Within a short period of time, the story of the dog has gone viral. And why should it not be so? Have you ever seen somebody so fiercely loyal? Emotional things like these captivate the imagination of humans.

Loyalty is one virtue that should never be undermined. It is this nobility of heart that existed in lovers who were together even in the face of death. It is this trait which serves as a foundation for patriotism. It is this quality only that helps us to overcome the whole world and capture the impossible.

15. The Real Hachiko Had A Tragic End

The Greek Dog was anointed with such a nomenclature because of a reason. Ever heard of the story of Hachiko, a Japanese Akita dog who waited for his deceased owner to arrive? Its owner was HidesaburÅ Ueno, a Tokyo University Professor. He kept waiting at Tokyoâ€™s Shibuya train station(where it would come daily, to receive its master and walk back home) every day for nine years until he too passed away.