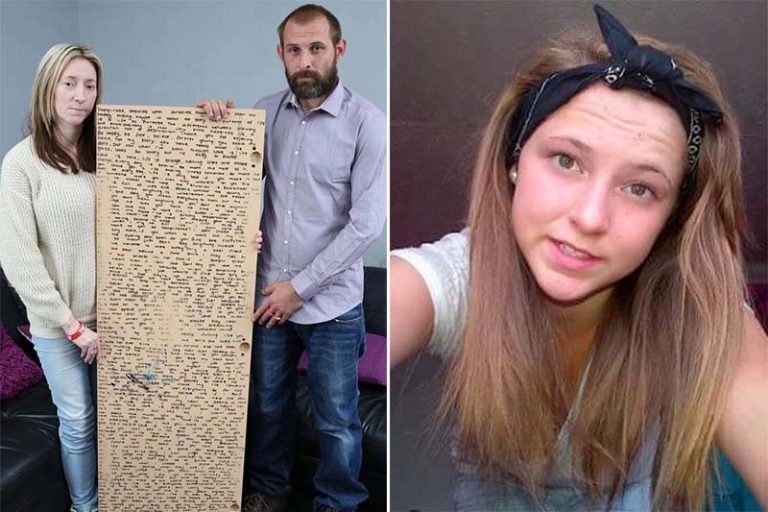 One of the most heartbreaking things in the world is disease that takes the lives of children. This is a story of a little girl who was diagnosed with cancer at a young age. While many doctors tried to save her life, their efforts were in vain and the little girl lost her life. However, there was light among that darkness and she left a message for the world.

On Christmas Day 2013, Athena Orchard, a 13-year old girl, was in the full spirit of the joys in Leicester, England. Everything was pretty much normal and the family was having all the fun but something terrible happened. Athena suddenly collapsed on the floor.

When her parents rushed her to the hospital to find out what had caused the sudden collapse. They received devastating news when the doctors told them that their daughter was suffering from bone cancer.

Even though the news was quite shocking, the little girl did not lose her positivity and decided to keep her spirit. The doctors immediately entered her into the emergency room and spent nearly 8 hours removing the tumors. She would have to go through months of chemotherapy but she was soon able to return home to her family.

Putting Down Her Feelings

Like many other patients under chemotherapy, Athena lost all her hair. Most of her strength was given to the chemotherapy and in order to pass the time, she wrote songs that put down her feelings into words.

Athena’s dad said that the little girl was a spiritual person and a very clever girl. However, with her declining health, her parents would only later find out how clever she actually was. On May 28th the next year, Athena passed on to the next life and was surrounded by the love of her parents, her six sisters, and her three brothers.

Her Father Found Something Special

When Athena’s father was looking through his daughter’s things, he moved a mirror that was in her room. On the rear of the mirror, there were nearly three thousand handwritten words.

Athena’s emotions could be seen quite clearly and when her words were first seen by her parents, they were blown away. The long note was written when Athena was at the height of her battle with cancer.

The purpose of life is a life of purpose. The difference between ordinary and extraordinary is that little extra.

Happiness is a direction, not a destination.

Thank you for existing. Be happy, be free, believe, forever young.

You know my name, not my story. You have heard what Iâ€™ve done, but not what Iâ€™ve been through.”

“Love is like glass, looks so lovely but itâ€™s easy to shatter.

If someone loves you, then they wouldnâ€™t let you slip away no matter how hard the situation is. Remember that life is full of ups and downs.”

“Never give up on something you can’t go a day without thinking about. I want to be that girl who makes the bad days better and the one that makes you say my life has changed since I met her!

“Sometimes love hurts. Now I m fighting myself. Baby, I can feel your pain. Dreams are my reality. It hurts but it’s okay, I’m used to it.

Donâ€™t be quick to judge me, you only see what I choose to show youâ€¦ you donâ€™t know the truth. I just want to have fun and be happy without being judged.

This is my life, not yours, donâ€™t worry about what I do. People gonna hate you, rate you, break you, but how strong you stand, that s what makes you you!

Thereâ€™s no need to cry because I know youâ€™ll be by my side.”

Leaving Everyone In Tears

When Athena’s father, Dean, read the note, he was in tears. Everyone in the family was taken over by the raw emotion and integrity of the note and they held on to every word that Athena had wrote about her ups and downs in life.

â€œItâ€™s so touching. She never mentioned it, but itâ€™s the kind of thing sheâ€™d do,â€ Said Dean. â€œJust reading her words felt like she was still here with us; she had such an incredible spirit,â€ added Caroline.

The Love Of Friends

After Athena had passed on to the next life, her friends and her family stopped by her house in Leicester. They scribbled notes of love on the windows of the house to let the family know that everyone loved Athena.

Even though her life was short, her memory lives on. This is so by her words, by the people that love her, and by the people on the internet that read her story.